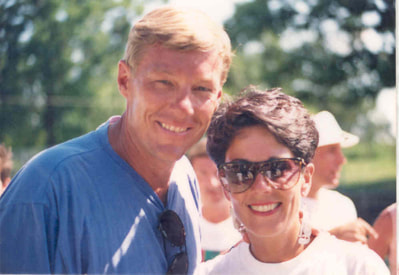 The story of the Pine Tree Apple Tennis Classic (PTATC) is an amazing one! Ron and Mary Ann Peterson created the PTATC in 1986 when their 12 year-old daughter Juliann was diagnosed with leukemia. Their mission was to raise money to provide the medical professionals at Children’s Minnesota a means and a way to research, while still being able to perform the crucial efforts of treating children with cancer.

At that time, there were no meaningful tumor registries and protocols for how to treat many cancers with a high degree of success.  The Petersons (right) wanted to give back after receiving such great care for their daughter and contribute towards the fight to end pediatric cancer. The Jacobson Family of the Pine Tree Apple Orchard stepped up to provide the “seed” money to start the event which raised $15,000 in 1986.

To date, we have raised over $6.4 million for cancer research at Children's Minnesota and around the world as your generous financial support helps provide vital information to cancer specialists and supports research areas where there is little or no national attention. As a result of our fundraising efforts, we have accomplished some amazing things, including the following:Now, over 37 years later, the Pine Tree Apple Tennis Classic hosts more than 100 of the upper Midwest's top men’s and women’s tennis players during this annual, mixed doubles tournament that takes place the first weekend in August at Life Time White Bear in White Bear Lake, Minn. (SAVE THE DATE: This year's tournament is set for August 4-7, 2022).
We invite you to watch the videos below to hear the amazing story of the Pine Tree Apple Tennis Classic (PTATC) and learn about the research programs at Children's Minnesota that benefit from funds raised by Pine Tree Apple Classic Fund.
Funds raised benefit